In our “Where Are They Now?” series, current student interns interview former interns about their experience at the Office of Sustainability, and in particular how that experience has helped them since graduation. In the following entry, Kylie Thomasen relates her conversation with Jackie Millonzi. 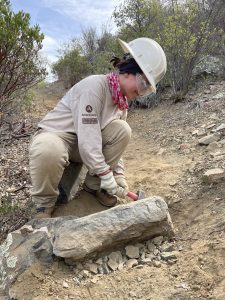 Jackie Millonzi was an intern at the Office of Sustainability (OS) from the summer of 2018 until her graduation from UW–Madison in 2020. Since graduating, she has explored different opportunities, including serving in the AmeriCorps for the Schools of Hope project to provide literacy support for students in the Madison area, working in the Aldo Leopold Nature Center as an Environmental Educator, and helping her mom with family law. I was lucky to catch Jackie over Zoom shortly before she started a project to maintain and build new trails with the American Conservation Experience (ACE) in Nevada for the next month. In June, after serving with ACE, she will start an internship near Portland, Oregon to help make outdoor recreation more accessible.

While interning with the OS, Jackie was primarily involved with the Green Events and Waste and Recycling teams, but she was also instrumental in creating new ones. After studying abroad in Copenhagen, Denmark, Jackie collaborated with other interns to start the Transportation team. Later, she also helped create the Green Allies team, today known as the Social Sustainability Coalition, as well as Green Athletics.

One of Jackie’s biggest takeaways from the OS was the value of hands-on experience. She enjoyed getting out on campus and in the community, especially through field trips, and meeting people who did behind-the-scenes work instead of only reading about those experiences in a book. One of her favorite memories from the internship was attending the AASHE conference in Spokane, Washington. She recalls, “I got to talk about compost, so obviously I had a good time. But it was just so great to be able to take a little break from school and it was almost a tiny vacation.” Jackie also reflected positively on the collaborative teamwork and the opportunity for individual, project-based work the OS provided, as most of her experiences since graduation have incorporated that work style. 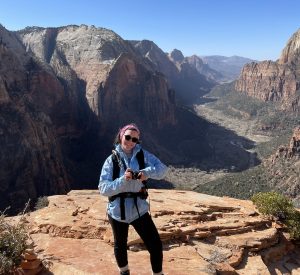 Jackie recounted the summer sessions with the OS as a time to learn, get to know other interns better, and participate in professional development workshops. She shared that the workshops helped her develop and gain confidence interacting with others and trying new things. “I feel like the OS had a really good atmosphere for that—wanting you to grow professionally and personally.”

Jackie’s primary tip for others is to “ask people questions all the time,” which is helpful while working in the field. When asked for her advice about how others can implement sustainability in their lives, she suggested  trying “little changes that can make a better impact on people and the planet,” and she encourages people to “be aware of what’s going on in the world and how you have an impact.”