“Fossil Fuel Divestment: Climate Action or Climate Distraction?” was one of the major events of UW–Madison’s fifth annual Earth Week, which was held from April 18-24, 2022. Divestment means selling shares invested in fossil fuel companies. It is at the center of impassioned debates at college campuses across the country: students are calling for institutional action to avoid crossing the 1.5 degree Celsius threshold of average global temperatures, which will result in mass extinctions, the loss of 99 percent of coral reefs, unprecedented storms, flooded cities, a migration crisis, extreme heat, increases in food instability and vector-borne diseases, as well as aggravated effects on poverty, homelessness, and racial and global inequality. The panel discussion at UW–Madison sought to respond to this urgency in a balanced exchange about the merits and limitations of divestment.

“The conversation about divestment has become somewhat brittle,” Nathan Jandl, the Assistant Director for the Office of Sustainability, said in his opening remarks. “There have been precious few structured opportunities to discuss the topic and folks on both sides of the argument tend to fall back on relatively simple claims. This keeps everyone at arm’s length and not really discussing the complex underlying issues.”

At times, personal investments about divestment came through in the panelists’ speech. Ashley Cheung, ASM Sustainability Chair, spoke passionately, stressing what “we, here at UW,” need to do. When moderator Ann Terlaak suggested that “it’s just easy to ask for the foundation to divest” rather than working toward renewable energy, Steph Tai, a professor in the Law School, interrupted, saying, “I’m doing the work … so it’s not just that. I do take a little bit offense to that.” During the Q&A, one attendee asked, “Shouldn’t there be more urgency?” 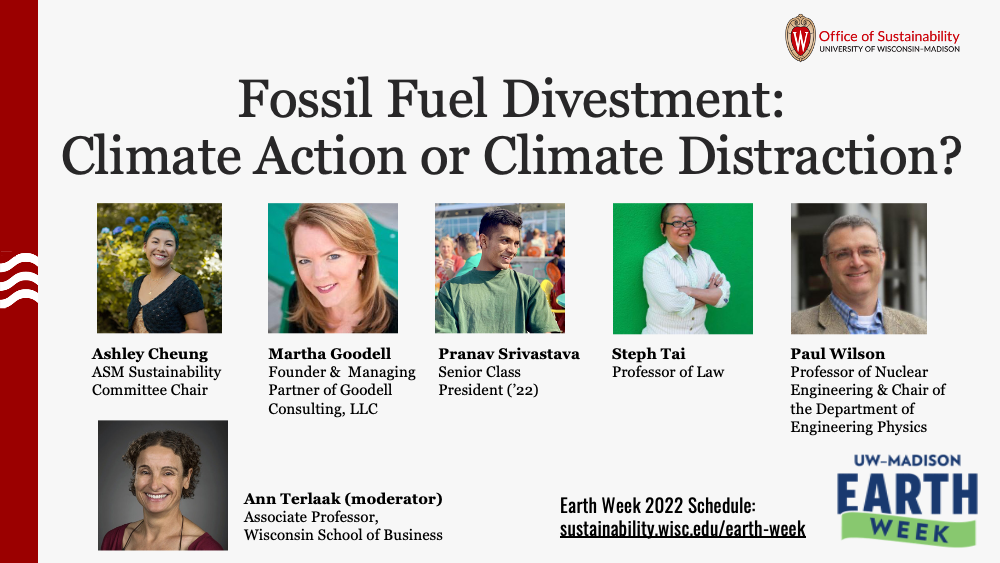 UW–Madison students and faculty have recently demanded divestment. The Wisconsin Foundation and Alumni Association (WFAA), a private nonprofit that works in service of the university and, according to its website, “encourages individuals and organizations to make gifts to the university and to connect with the UW.” It also manages these gifts as part of the university’s endowment, investing the funds for maximum returns over time. Although Terlaak reminded panelists to speak about divestment “on a more general basis,” the discussion frequently returned to the university and the WFAA.

Financing the devil—or trusting your investors?

Terlaak, who last year co-authored an article about “Environmental Performance and Firm Market Value,” summarized four arguments common in discussions about divestment, two of which concern financial gain. Those in favor of divestment argue that divesting will lower the share prices of fossil fuel companies, indirectly “defunding” them. Opponents claim share prices would not be affected; rather, maintaining shares and influencing companies through “active ownership,” also known as shareholder advocacy, would more effectively combat the climate crisis.

Advocates for divestment also make claims about fiscal prudence, as the market for green energy is growing rapidly and some governments are shifting away from fossil fuels. Opponents suggest there isn’t a need to divest immediately because experienced investors will divest on their own, if the risk of fossil fuel investments becomes significant enough to justify the transition.

Martha Goodell—the founder of a clean energy consulting company with experience in investment management, corporate venture capital, and angel investing—voiced a pragmatic approach throughout the night and claimed that divestment is mostly a “symbolic action.” It would be more effective, she argued, for shareholders to leverage the experience and “large balance sheets” of fossil fuel corporations for “efficient, lower-carbon alternatives.”

“I see it as a time continuum of decisions” for making change in fossil fuel companies, she said. “There’s a tipping point where divestment is no longer beneficial or as powerful. It is that more active participation at the board level, investing in more opportunities that that company’s going to want to buy into.”

Pranav Srivastava, the Senior Class President majoring in Finance and Economics, contested that investing in fossil fuel companies in the first place is not justified by the returns.

“If you look at financial opportunities, we’re not seeing outsized returns from investing in fossil fuel companies,” he said. “We’re not seeing 10 to 15 percent returns on these companies ahead of the broader market. The fact is you can achieve similar returns by investing elsewhere.”

Paul Wilson, the chair of the Department of Engineering Physics and Grainger Professor of Nuclear Engineering, disagreed.

“You really are questioning the investment strategy of the [Wisconsin] Foundation overall,” he said. “We hope to trust them that they’re also assessing these risks and assessing that these risks are actually real.”

Tai, the law professor and one of the co-authors of the March 2021 Faculty Senate Divestment and Procurement Resolution, which called for the WFAA to divest, said they joined the resolution because they wanted the WFAA to invest in companies with lower financial risk than those selling fossil fuels.

“My hope is that these risks are being considered,” Tai responded to Wilson. “Part of the problem is that there’s no way for outsiders to really assess … The ask of trust is a lot given the history of the fossil fuel industry.”

The morals of divestment

Those in favor of divestment argue that organizations—especially higher education institutions—have a moral imperative to divest. Their opponents claim fossil fuels are not in themselves immoral, and if they were, even divestment advocates would be implicated in that immorality due to the presence of fossil fuels in countless products and services.

“I’m just a student, I’m not even 20, but I’m sitting here because this matters, not just in terms of economics … but in terms of my life and all of your lives,” she said, citing the estimated $125 million the WFAA has invested in fossil fuels. “The underlying question is about morality: what do we value?”

Wilson responded that, while “climate change is a moral issue,” fossil fuels are not.

In response, Srivastava noted the history of fossil fuel companies misleading and lying to consumers about the facts of climate change, as well as the damage their business wreaks on the environment.

“It is improbable to completely cut the use of fossil fuels immediately,” he said. “However, we as an institution do have a moral obligation to fight towards a better tomorrow. That includes an effort of divestment.”

The final argument about divestment, Terlaak explained, is whether it is merely symbolic. Symbolic action benefits climate action by demonstrating urgency. But, as the opposing argument goes, “the challenge is so big that it requires substantive, not symbolic, action, and that symbolic action crowds out substantive action” by using resources and time. The roundtable participants engaged the most with this debate.

“I feel the need to say that I’m not opposed to divestment for principle,” Wilson said to preface his opinion. “I’m coming out on one side of these arguments, but I think that the point of this evening is to get at these nuances.”

He went on, however, to reject divestment, saying climate change has become too severe for anyone to act symbolically. Instead, he said, “we should be focusing more on how we can actually be making changes,” such as inventing carbon capture technologies and lobbying policymakers.

Tai countered. The Faculty Senate Divestment and Procurement Resolution they co-authored included stipulations that UW–Madison should develop “carbon-friendly institutional procurement strategies,” an action that does not garner as much attention as divestment but that would benefit the movement against climate change. “Without having divestment,” Tai said, “there is absolutely no way it [the procurement resolution] would have passed.”

During the Q&A, Wilson continued the topic.

“I’m not convinced that this university divesting from fossil fuels is actually going to have a lasting symbolic impact,” he said. “I agree, I hear what Steph says about the symbolic impact of helping other measures pass, but if we were to make the decision today to divest ourselves from fossil fuels, a month from now it would no longer be making any headlines. Focusing on those issues that have a lasting impact, and a growing impact, is more important.”

“When individual institutions are all saying the same thing at the same time, that’s indicative of a greater message,” she said.

To conclude: a hypothetical question

“Imagine we all divest, all democracies divest,” Terlaak said at the end of the discussion. “What would be the remaining regimes that control energy? It would be, to the largest extent, autocratic regimes. That assumes divestment does anything. That’s disconcerting, no?”

“We’re converging to the point where renewable energy is just as viable, just as economical, relative to traditional energy sources,” he added. “When you factor in the additional component of how is the earth left by using one source versus the other, there’s a very clear answer.”

To view a recording of the divestment discussion click here: https://youtu.be/Z3vJboc4qgk