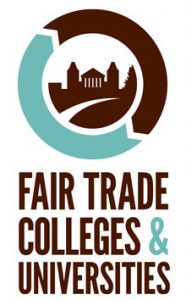 Fair Trade Campaigns is a grassroots organization that was founded in the United Kingdom in the early 2000s. What began as a way to recognize towns for implementing Fair Trade products and policies has evolved into an international movement that includes cities, K-12 schools, congregations, and universities.

The Office of Sustainability and the Labor Codes and Licensing Advisory Committee (LCLAC) are teaming up to implement the Fair Trade Campaign requirements at UW–Madison. The requirements entail expanding access to Fair Trade products in campus venues, teaching conscious consumerism at campus events and in the classroom, and seeking official support from students, staff, and faculty.

By pursuing Fair Trade designation, UW–Madison is addressing several critical questions about its consumer activity. For instance, is the institution an ethical consumer in our local community? How is UW–Madison teaching students and campus visitors to be conscious about what they buy? How is its activity in the global market impacting lives around the world?”

Universities play an important role in the global economy. From produce to electronics, universities bring in millions of dollars worth of goods, all of which have unique social, environmental, and economic footprints. Certifying products as Fair Trade ensures that these footprints do not negatively impact the communities from which goods are sourced. In practice, by providing a Fair Trade coffee option to students, staff, and faculty at campus venues, UW–Madison will be helping to provide fair wages, ensure environmentally responsible harvest, and guarantee workers’ rights.

The Fair Trade University designation will also build on other campus efforts to fight for workers’ rights and a sustainable global economy. As a founding member of the United Students Against Sweatshops (USAS), UW–Madison has been at the forefront of leveraging the power of higher education institutions for global change. USAS has grown to include hundreds of colleges in North America, as well as joined other institutions to create the Workers Rights Consortium (WRC), a global task force focused on labor rights. UW–Madison maintains an ongoing partnership with the WRC via the LCLAC.

Stay up to date with the project by visiting UW–Madison’s Fair Trade Campaign website and signing up for the Office of Sustainability newsletter.