Early in March 2022, at the UN Environment Assembly, diplomats from 175 nations voted unanimously to create a legally binding agreement to end plastic pollution. The Executive Director of the United Nations Environment Programme (UNEP) called it “the most significant environmental multilateral deal since the Paris accord.”

Barbara Hendrie was in the room. She is the director of UNEP’s North America Office, and on the evening of March 24th she spoke to UW–Madison students and faculty about the consequences of plastic pollution, as well as the importance of the resolution earlier this month. 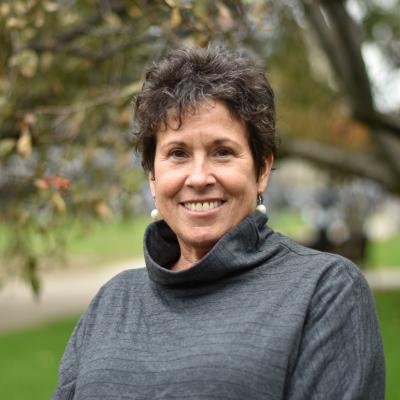 “What I saw in Nairobi, what I was privileged to witness, is that global cooperation among nations to solve our collective problems is possible, but it needs to be enabled and motivated by action at local and regional level,” Hendrie said. “At that moment the gavel came down at the UN Regional Assembly, everyone felt an almost-euphoric sense of accomplishment in what we can achieve together when we put our minds to it.”

Hendrie, one of six regional directors on the UN Environment Programme’s Senior Management Team, spoke in the latest of the Weston Roundtable Lectures, a series co-sponsored by the Center for Sustainability and the Global Environment (SAGE) and the Department of Civil and Environmental Engineering to “promote a robust understanding of sustainability science, engineering, and policy.” Calvin Floyd, a senior majoring in Environmental Studies, moderated the event’s Q&A and arranged Hendrie’s visit through his fraternity, Psi Upsilon, of which Hendrie was a member at her undergraduate university. The Office of Sustainability, including student intern Natalie Tinsen, provided additional support for the event.

In her lecture Hendrie emphasized the scale of plastic pollution, which increased drastically in the past half-century: today there are 8.3 billion tons of plastic on earth, 6 billion of which is waste. Only 9 percent of single-use plastics are recycled globally, Hendrie said, and only 7 percent in the United States.

“Plastic is an incredible material: it’s durable, it’s diverse, it’s useful, it’s a testament to human ingenuity,” Hendrie said. “But, actually, its durability is part of the problem because plastic never really disappears. When it’s in the environment it might break down into smaller and smaller fragments, but it will last for upwards of a thousand years.”

“This is a statistic that actually really woke me up to the problem: it is estimated that by the year 2050, there will be more plastic in the ocean than fish,” she continued. “That sounds pretty shocking, and it is.”

Hendrie also discussed local-global resolutions to pollution and climate change. She described the “three main and interrelated planetary crises”—climate, loss of biodiversity, and pollution—as “interrelated,” as well as “metastasizing, at a rather alarming rate.” To resolve these interrelated problems, Hendrie said, UNEP cannot act alone. She noted how the landmark resolution in Nairobi resulted from companies wanting to work toward a more comprehensive system of production, the U.S. government aspiring to make ambitious environmental agreements across the world, and “developing countries in the Global South who probably suffer the most because of environmental waste” vouching for change.

The title of Hendrie’s lecture, “Tackling Environmental Challenges (Including Plastic Pollution) Globally and Locally,” reflects UNEP’s emphasis on global and local approaches to sustainability.  According to its website, the organization “sets the environmental agenda,” “promotes the coherent implementation … of sustainable development within the United Nations system,” and “serves as an authoritative advocate for the global environment.” 193 Member States comprise the United Nations, and UNEP’s environmental conventions and agreements include the conservation of European bats and African–Eurasian migratory waterbirds, the management of hazardous waste in Africa, and Small Cetaceans in the Baltic, North East Atlantic, Irish, and North Seas. UNEP’s “environmental, social and sustainability framework” also suggests the importance of interconnectedness, with goals of “systematically integrating environmental and social dimensions,” “strengthen[ing] alignment” among UN members, and honoring commitments to cultural heritage, working conditions, biodiversity of species, and indigenous peoples, among others.

Hendrie has traversed the globe in her lifelong humanitarian and environmental efforts. She studied English at Bowdoin College in Maine and earned an MSc and PhD in Social Anthropology at University College in London. In the 1980s, at the start of her career, Hendrie worked as the deputy director of an international nonprofit providing famine relief in the Horn of Africa. In 2006 and 2007, she led the UK’s economic reconstruction efforts in Iraq. According to UNEP’s website, she also oversaw the United Kingdom’s “$500 million annual response to humanitarian emergencies worldwide.” In addition, she was part of the UK negotiating team that produced the global Sustainable Development Goal framework at the UN in 2015. In 2016, the Obama Administration invited her to work on reducing global poverty for the U.S. Agency for International Development (USAID). Now, for the past four and a half years, she has devoted herself to sustainability.

“I considered myself an informed, intelligent citizen, and I cared about environmental issues like any other person,” she said in the Q&A. “But it was only really when I started working at UNEP and started reading material … and hearing the statistics … I did not understand how significant these challenges are and how interrelated they are. It was a shock, really. It was a shock.”

Yet she emphasized remaining positive—“Be careful … the bad stuff looms large and casts a bigger shadow, usually, than it actually has”—as well as politically engaged. While global crises cannot be resolved by individuals alone, by leveraging personal habits and appeals to local representatives, people can pressure corporations and what Hendrie calls “the political class” to lessen damage to the environment.

The UN Environment Assembly in Nairobi made this apparent. There, not long after Russia invaded Ukraine, bombarding civilians and triggering a refugee crisis, the Russian delegate at the assembly said Russia does not “mix environment and politics.” (Hendrie recalled how the rest of the delegates walked out of the room in protest.) Russia’s assault, however, has shown that political decisions wreak massive environmental effects—in air pollution, water contamination, food insecurity, displacement, loss of ecosystems, and possible radiation.

“There are the global geopolitics—like the invasion of Ukraine, which inevitably can skew what happens [with environmental resolutions]—and there are always going to be those geopolitics,” Hendrie said. “But there’s another kind of politics—which are actually really interesting and in a way more enduring—which is the politics of people putting pressure on their own governments to do something about issues they face. One of the reasons this resolution about plastic went through is because people are experiencing the effects of it—in India, in Indonesia, in Vietnam, in China, in countries in Latin America. In important member states, the citizens are saying, Actually, this is destroying our livelihoods.

“That kind of politics bubbles up from below. Then you see what we saw in that room in Nairobi, which is the accumulation of those politics, which have reached their critical velocity.”