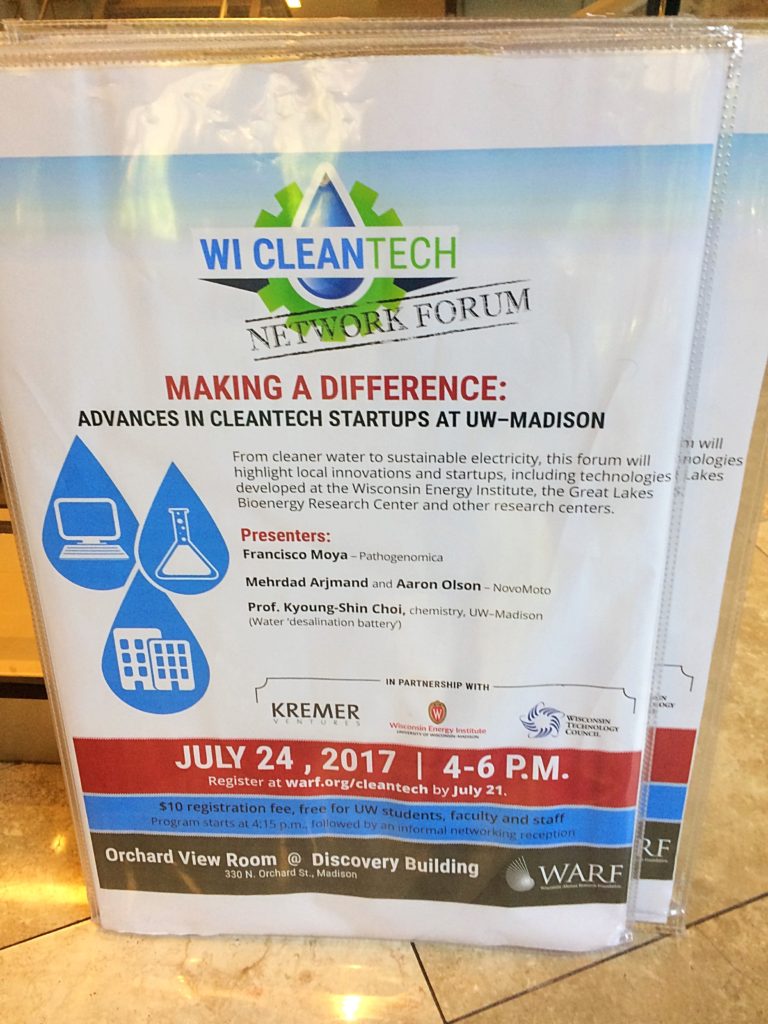 “Cleantech” is short for clean technology, a term used to describe products or services that reduce waste and require as few non-renewable resources as possible. The University of Wisconsin–Madison currently provides more than $100 million in federal grant funding the growing field of cleantech research. In addition, the Wisconsin Alumni Research Foundation (WARF), in cooperation with the Wisconsin Technology Council and Kremer Ventures, produces regular forums on cleantech, which include presentations, audience Q&A, and networking opportunities.

Joe Kremer was the master of ceremonies, introducing each of the startup presenters. Kremer served for six years as the Director for the Wisconsin Angel Network (WAN), a program of the Wisconsin Technology Council. During that time, he learned about the cleantech research happening at the UW and developed the idea for the forum to encourage the growth of cleantech start-ups.

“To the greater community, clean technology is about using as little resources as possible and being conscious about the finite resources we have available. On campus we have millions of dollars for research which is funded every year and a lot of new technology being developed, so talking about it can be very useful,” Kremer says.

Francisco Moya and Jacqueline Mejia are Ph.D. candidates in the civil and environmental engineering department at UW–Madison. They spoke on behalf of Pathogenomica, a company they co-founded that uses genetic sequencing to identify bacteria in drinking water and other samples. The goal of the company is to prevent microbial outbreaks and protect public health.

“The current detection technologies are limited to specific microorganisms—there are culture-based approaches and molecular-based approaches. The problem with that is 20 percent of the outbreaks that occur today are due to unknown and unexpected pathogens. We use genetic sequencing, a tool that works as a master key that can identify all of the different microorganisms present in a sample,” Moya said. Pathogenomica’s work was supported in part by the Wisconsin Alumni Research Foundation through the gBETA program.

Aaron Olson, a current PhD student in engineering mechanics, and Mehrdad Arjmand, a recent graduate of the same program, spoke next. They are co-founders of NovoMoto, a startup that provides solar energy to off-grid communities in the Democratic Republic of Congo (DRC). In sub-Saharan Africa, over 600 million people live without access to grid electricity. Their pilot country, DRC, has the third largest off-grid community in sub-Saharan Africa at over 3.5 million homes.

According to their data, DRC uses mainly kerosene lamps to meet its lighting needs, along with diesel generators for limited access to electricity. Arjmand explained that kerosene is a substandard and expensive lighting source for these communities, and on average the costs consume 25 to 30 percent of their annual income. These energy sources also pose significant health and environmental risks. “People in the Congo are spending a lot of money on energy that is not providing a good experience and we’re there to provide them with a more affordable and clean utility,” Olson says.

NovoMoto provides customers with an affordable business model that allows customers to pay for sustainable lighting and electricity in small increments over a time period. In 2016, the startup won $90,000 in the Clean Energy Trust Challenge, a contest for the “largest single-day clean energy pitch competition in the nation.”

Professor Kyoung-Shin Choi, UW–Madison chemistry department, noted that 66 percent of the world’s population live without access to fresh water for at least one month out of the year and that a half billion people around the world suffer from water scarcity. To address this problem, she proposed a water desalination battery that may enable practical large-scale desalination.

“Considering the abundance of sea water on Earth, desalination’s a viable option to achieve an adequate supply of fresh water,” Choi explained. Her work is currently supported by the WARF Accelerator Program, which patents UW–Madison discoveries and provides expert advice from business mentors.

For more information about the Wisconsin CleanTech Network or future monthly forums, contact Joshua Carson at jcarson@warf.org or (608) 890-1622. Carson serves as a licensing associate at the WARF and manages the patents and technologies for both Professor Kyoung-Shin Choi and Pathogenomica.