Senior Emily Baumann is no lightweight when it comes to Styrofoam.

As she prepares to graduate next week, the UW-Madison biochemistry major is leaving behind a growing program for reusing and recycling the thousands of Styrofoam shipping boxes that campus labs receive every year.

Shipping containers made of expanded polystyrene (EPS), often called Styrofoam, are a major waste stream at large research universities. Each year, UW-Madison alone receives more than 10,000 EPS shipping boxes used to insulate and protect laboratory reagents and other research materials. The majority of them end up in the landfill, where they take up a lot of space and do not break down into methane or other harvestable energy sources. 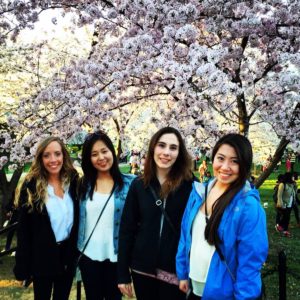 As a leader of the UW-Boxable team, Baumann is working to improve campus networks for keeping those containers out of the landfill.

Baumann helped co-found the UW-Boxable team in 2012 when she answered a call from the UW-Madison Office of Sustainability for students to help write a grant for the People, Prosperity and the Planet (P3) Student Design Competition for Sustainability. The P3 program, run by the United States Environmental Protection Agency, encourages students to design innovative solutions for sustainability challenges.

Though she had no prior experience with writing grants – or with Styrofoam – Baumann was intrigued. She partnered with Katelyn Budke, also now a senior, and former team members Jenna Walsh and Jared Ottman to develop an initial plan for a campus Styrofoam collection and reuse network.

Postdoctoral fellow Andrew Markley, who piloted a similar program while living in San Diego, guided the undergraduate team and has served as team adviser throughout the development and implementation of the project.

With their initial application, the UW-Boxable team won a $15,000 phase I grant in 2013 to pilot their project, then successfully competed for a $90,000 phase II grant in 2014 to expand their networks on and beyond campus. They were one of just nine groups to receive funding out of 40 finalists.

“I had no idea that it would turn into this national award-winning thing that it is today,” Baumann says. 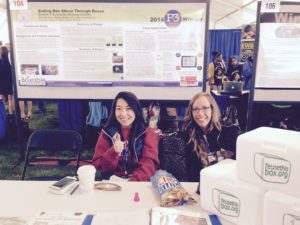 UW-Boxable has partnered with the WE CONSERVE program to establish EPS collection sites in campus research buildings and redirect the containers for resale, reuse, or recycling by Uniek, a Waunakee company that transforms the material into picture frames and other products.

The team has also worked with other universities to expand EPS reuse networks in other geographic areas. Baumann hopes that in the future, UW-Boxable is able to fully transition into a non-profit organization and gain additional partnerships. The current team, including business students Lulu Liang and Sarah Yim, is working on a new organizational structure and earned an honorable mention in the G. Stevens Burrill Business Plan Competition on May 1.

Currently, Baumann says, about 60 percent of UW-Madison labs are recycling their EPS, reflecting increasing awareness of the program. She hopes that percentage will grow with more educational outreach.

“There are the die-hard green people who will definitely bring their containers down from their labs to the drop-off stations, but then there are the people that still just throw it out,” Baumann says. “We started with three pick-up locations on campus and now we are up to 24.”

Reflecting on her years with the program, Baumann says her favorite moment was when the announcer at the national P3 competition in Washington, D.C., announced that Boxable won a phase two grant.

“It’s a good program, it’s a lot of work… but my speaking, writing skills, presentation abilities have definitely gotten better just from promoting this and presenting at conferences,” she says. “I have definitely grown from Boxable.”

After graduation, she plans to gain some additional work experience and later attend physician assistant school.