The market will run every Thursday from 11:30 a.m. to 3:30 p.m. until October 24, according to a Union Directorate press release. 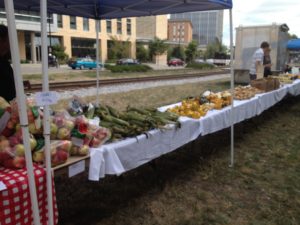 “The event provides convenient access for students to local produce and give them an opportunity to meet and greet their local food providers, as well as learning about local food practices,” Wisconsin Union Dining Services Assistant Director Carl Korz said in the release. “We are starting with a core group of local producers, however, the event will likely grow larger every season and we are hoping to attract more local farmers.”

Market Coordinator Nicole Prekop said they set a goal of 200-300 attendees, and they easily exceeded that by mid-day.

Prekop said she initially reached out to 5 or 6 vendors, but they hope to expand to 6 to 8 vendors by the end of the season.

Vendors include David Paar of Paarfection Produce from Monroe and Laura Tisch of Munchkey Apples in Mount Horeb, according to the release.

According to Prekop, they chose to host the  market closer to the weekend, when students would be more likely to cook fresh food, and they chose a location that would be central for students.

She said they wanted to students to know it’s possible to eat fresh and organic food while living on campus.

“Our slogan is ‘fresh made easy’,” Prekop said.