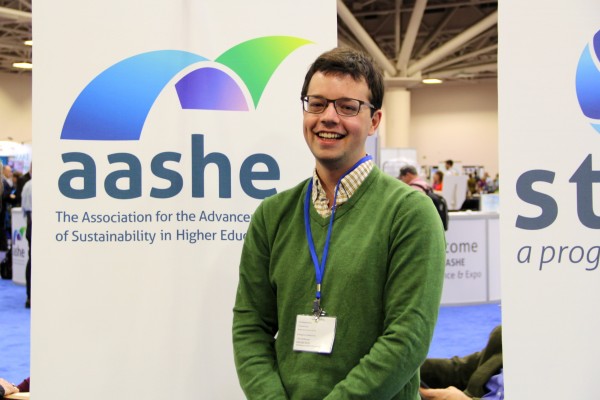 University of Wisconsin–Madison graduate student Tom Bryan was honored this week at the annual meeting of the Association for the Advancement of Sustainability in Higher Education.

On Oct. 25, Bryan received the 2015 Student Research in Campus Sustainability award for his work investigating the environmental impact of menu items served at Ginger Root in Union South.

“Consumers have huge influence over the food supply chain,” Bryan says. “The decisions that we make when we’re hungry impact all the steps of this chain and people throughout the industry.”

However, he says, making informed food choices can be a challenge even for the most engaged eaters.

“The food system is difficult to understand and visualize because it’s separated from the consumer both in time and in space,” Bryan says.

His research aims to shrink those gaps.

Working with dining and restaurant staff in Union South, Bryan tracked ingredients used in popular Ginger Root dishes through the many steps of the food supply chain, from students’ forks as far back toward the farm as possible. He followed items through the two largest food distributors for campus, Martin Bros. of Cedar Falls and V. Marchese of Milwaukee, and analyzed the energy, waste, and other resources needed to produce, process, package, transport and cook the ingredients for a meal.

Although a growing number of people are familiar with the notion of “food miles,” or the distance between where a food is grown and where it is eaten, Bryan says, transportation is not the largest environmental culprit for most foods. Instead, the biggest impact often comes from production methods at the farm level – factors such as tilling fields, irrigation, and fertilizer use.

Another finding that may be surprising is that rice has an environmental footprint comparable to some types of meat – largely due to flooding rice paddies, he says.

“This has been a professional education to my staff too,” says Carl Korz, assistant director of dining for the Wisconsin Union. “We need to move this info into that mainstream so people can make decisions based on impacts on health and global health.”

Bryan has also integrated his research into an introductory environmental studies class, where undergraduates explore principles of food sustainability through eating at Ginger Root and studying the environmental impact of their meals. (Watch the video below to see how students are learning through eating.)

“We want students to connect daily food choices to the broader food system and recognize the impact that food has on the planet,” says Bryan.

Bryan completed his master’s degree this fall and is continuing his efforts as a doctoral candidate in the Nelson Institute for Environmental Studies working with professor Cathy Middlecamp. He is now exploring ways to share environmental impact information with campus consumers and is working with a food science course this semester to develop and test new meatless recipes for Ginger Root.