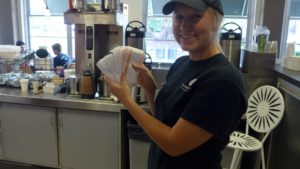 If you’ve eaten at a campus dining center recently, something may have been missing from your order – but perhaps you didn’t even notice.

Beginning this semester, University Housing’s registers no longer automatically print receipts for every transaction. The Wisconsin Union is following suit, testing a similar change at select locations that should roll out across campus next week.

“So many people didn’t want their receipts. They would ditch them around the cash register, or they would fly off their tray,” says Julie Luke, associate director of Dining and Culinary Services for University Housing.

Some transactions, such as credit card sales, will still require receipts, and customers can always request one if they want to. But, it seems, the majority of customers do not.

The campus receipt reduction project is a partnership between University Housing, the Wisconsin Union and the UW–Madison Office of Sustainability that is striving to reduce waste on campus.

It has its roots in an idea sparked by physics professor Duncan Carlsmith, who was getting fed up with all the unwanted receipts he saw printed at campus coffeeshops.

“I was thinking, no, thank you! What a waste! Maybe the barista cash register is a great place to send a general message about waste reduction,” Carlsmith says. 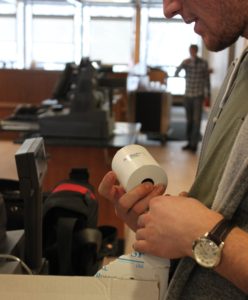 Through the Office of Sustainability, Carlsmith connected with undergraduate Rachel Feil, who developed the receipt reduction project through her sustainability internship and as a class project for an environmental studies capstone course before graduating in 2014.

Feil also paired up with fellow student Kyla Kaplan, who herself had noticed the abundance of unneeded receipts as a campus concern while working with the Associated Students of Madison (ASM) Sustainability Committee. Together they reached out to several campus entities, including Housing, the Unions, DoIT, Transportation Services, and the Babcock Dairy Store.

As they learned about each organization’s paper use and customer needs, they decided to focus on the Unions and Housing due to transaction volume. Working with Luke of Dining and Culinary Services and Laura Shere, sustainability coordinator for University Housing, they assessed broader student interest in the issue.

“They really wanted a survey to see if this is really something students are interested in or if this is just a couple of people with a concern,” Kaplan says. They sent out their survey through ASM and were overwhelmed with student interest, garnering the highest response rate of any recent ASM survey. “There’s clearly a need.”

The survey respondents voted overwhelmingly against paper, with nearly two-thirds saying they would prefer optional receipts and an additional third requesting no receipts at all. Only three percent of respondents favored mandatory receipts.

Many students indicated they used the receipts only for checking their Wiscard account balance. Students can still check their balances at the registers or online.

Luke says the student response was critical for driving the effort. “It was a very well-done survey and the numbers were very compelling,” she says. “We like to pride ourselves that we are very resident and student-customer driven.” 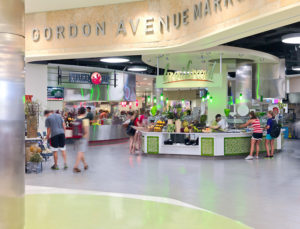 With data in hand, Kaplan worked with Housing as they moved forward with a pilot receipt-optional program in Newell Smith Hall in the 2014-15 academic year. With few exceptions, the pilot went very smoothly, Luke says, and Housing made all registers receipt-optional for standard transactions late this summer. She expects Housing will cut receipt paper expenses by close to 90 percent, saving tens of thousands of dollars per year.

The project partners point to co-benefits as well, such as eliminating paper litter around terminals and reducing employee and customer exposure to potentially harmful chemicals, such as BPA, found in the thermal paper used to print receipts.

And, Kaplan says, it is a powerful example of the impact that dedicated students can have on campus. “This was a project initiated by students, for students,” she says.