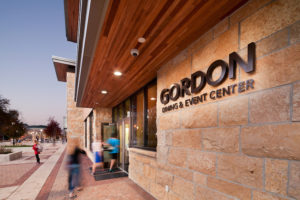 Much of the waste produced by food service operations is recyclable or compostable. However, misunderstandings about which materials can be recycled or composted and how to do so properly are common among both employees and customers. This can lead to a large amount of contamination in food service waste streams.

The Office of Sustainability worked with Dining and Culinary Services staff at Gordon Dining and Event Center to assess their waste streams and recommend process improvements. 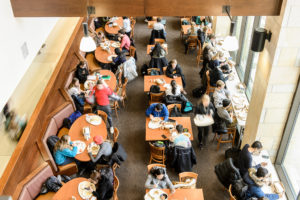 Contamination of recycling with trash causes many otherwise recyclable items to be sent to the landfill. Items that were incorrectly placed in the recycling included thin plastics (such as plastic wrap and bags), dirty foil, jars and other items with large amounts of food residue, and items composed of more than one material (such as plastic trays containing a non-recyclable absorbent gel).

Following the initial audit, the project partners created signs for the food preparation areas with pictures to aid correct sorting of waste items. They also engaged food service employees in the project via short employee training sessions known as “huddles.” In these sessions, Office of Sustainability students talked about the importance of separating waste, presented audit results, showed the most commonly mis-sorted items, and answered employee questions.

The efforts in Gordon Dining and Event Center are also shifting to the front-of-house area where customers dispose of their items. The trash and recycling bins in the dining area have been covered; instead, customers are now asked to put all of their waste on the tray return conveyor belt so that employees can sort it correctly. Gordon has a pulping machine that can break down post-consumer compostable materials such as paperboard takeout containers and food leftovers. This effort is increasing the amount of material that can be diverted to post-consumer composting. This practice also reduces accidental disposal of reusable dishware and utensils.

Next steps in this project are ongoing regular waste audits and integration of waste handling practices into standard employee training at Gordon Dining. Additional back-of-house signage is in development to track progress reducing contamination rates and highlight needed areas of improvement. The program is also working toward expanding to other campus dining halls and catering operations.