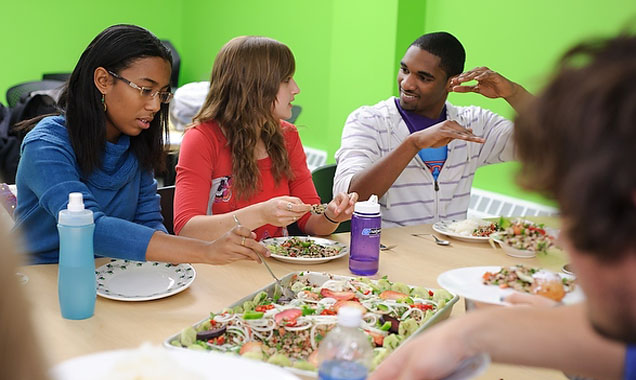 Faced with the startling statistic that more than 11 percent of Dane County residents are food insecure, a group of University of Wisconsin–Madison undergraduates are working to combat local hunger.

This fall, the students won a $5,000 grant from the National Campus Kitchens Project, a nationwide non-profit, to create a Campus Kitchen at UW–Madison to offer students and community members a new place to receive a nutritious meal.

Every day, campus dining halls end up with a lot of food that is still edible but, because it cannot legally be re-served, is thrown out or composted. The Campus Kitchen is partnering with UW Dining and Culinary Services to reduce food waste and fight hunger by collecting leftover food and using it to prepare fresh meals for individuals in need.

Sophomore Colin McReavy, one of the students leading the UW–Madison Campus Kitchen Project, wants to raise awareness of local food insecurity and encourage other students to take action. “So many people take food for granted and don’t think twice about it. Food becomes something that is put in the same category as sleeping or breathing,” McReavy says.

“I think we are fortunate to be at the university we are, where we are surrounded by so many students with goals that align with ours. These students will make a project like Campus Kitchen succeed,” McReavy says.

The Campus Kitchen also plans to provide resources for individuals to learn how to cook, tend a garden and make proper nutritional choices. “We want to make sure we are doing more than picking up leftover food and distributing it across the community,” McReavy says.

The Campus Kitchen at UW–Madison is expected to open this spring, with tentative locations at Goodman Community Center and St. Francis Church.