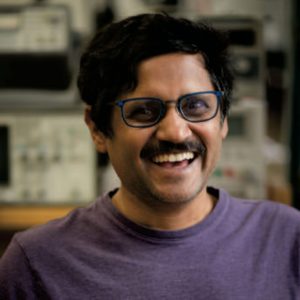 Giri Venkataramanan studied electrical engineering at the Government College of Technology, Coimbatore, India, and received his BS from the University of Madras, India. He moved to the United States to continue his studies and obtained his MS and PhD from Caltech and the University of Wisconsin-Madison, respectively. Upon graduation, Dr. Venkataramanan moved west to take a teaching appointment at Montana State University-Bozeman. For seven years, he taught electrical engineering, developed several courses, and designed and commissioned a power electronics and drives lab. During these years he began his research activities in the areas of solar energy, wind energy and small-scale energy systems, and helped a student team to build powertrain systems for a racing solar electric car, while developing a deeper sense of appreciation of the natural ecosystems from living in the Rocky Mountain West.

Dr. Venkataramanan returned to UW-Madison as a faculty member in1999. Since his return, he has been active in expanding and modernizing the laboratory infrastructure and instruction, while continuing to direct research in various areas of electric power conversion. He has been actively conducting research in the areas of power converter topologies,  microgrids, wind power systems, grid interface for electric vehicles and utility scale power electronic systems. He complements his interests in power electronics with educational activism both inside and outside the classroom, developing hands-on student projects aimed at increasing learning effectiveness and addressing various energy and sustainable development issues.

He has served as the faculty advisor for Engineers Without Borders and HKN student organizations. His students have built and installed wind turbines and solar systems in campus facilities. In recognition of his teaching excellence he won the ECE department’s Gerald Holdridge Teaching Award, the College of Engineering’s Benjamin Smith Reynolds Award for Excellence in Teaching, and the UW–Madison Chancellor’s Award for Distinguished Teaching. In recent years he has been leading various research and education activities related to sustainability of the human enterprise in collaboration with faculty members across campus, including computer sciences, urban and regional planning, agricultural and applied economics, education, and curriculum development both nationally and internationally. He draws his strongest inspirations from the Wisconsin Idea in exploring and expanding scholarship to reach beyond the university.